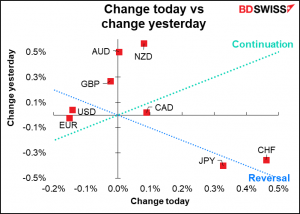 The “fear gauge,” the VIX index of implied volatility on S&P 500 options, is at the lowest level since July, indicating that stock market investors are relatively confident about the future. Of course “confident” and “complacent” can only be differentiated in retrospect. And Bitcoin hit a record high, indicating more risk-taking sentiment. 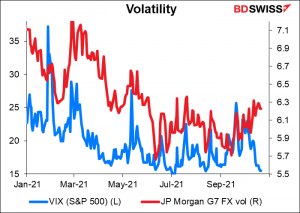 It seems that the rally in CHF and JPY was not due to risk sentiment but rather to the fall in short rates in the US, which makes low-yielding currencies more attractive. Yields on 2-year Treasuries fell -1.0 bp after Fed Vice Chair Quarles (V) and Cleveland Fed President Mester (NV) joined Gov. Waller (V) in pushing back against the market’s recent repricing of the expected path of Fed tightening. Mester said “the thought about raising interest rates is not a near-term consideration at all.” That’s not what the market thinks though. The first rate hike is priced in for next May. 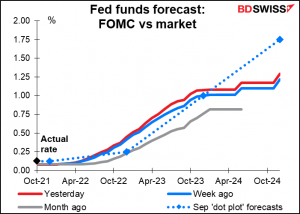 The trade-weighted indices (TWIs) for the commodity currencies were held down by the surge in the yen.They generally gained vs USD. AUD/USD for example was at a 15-week high.

EUR/USD is terminally boring. When I ran my spreadsheet this morning I checked to make sure I didn’t have a mistake: this morning’s rate was 1.1651 and yesterday morning’s was 1.1650. The day before that was 1.1656. Really, the bid/offer spread on currencies used to be wider than that.

Apparently the resignation of Bundesbank President and über-hawk Jens Weidmann didn’t have any lasting impact on the FX market. Weidmann’s resignation could cut both ways for the euro. Weidmann he is the Leader of the Pack (or flock would be more appropriate) of hawks on the European Central Bank (ECB) Governing Council. His departure will make it easier for the ECB to keep rates lower for longer. That’s negative for EUR. Of course this depends on who replaces him – will the left-leaning Social Democratic Party choose or the more fiscally conservative Free Democratic Party?

On the other hand, a more flexible person at the helm of the Bundesbank could provide a strong voice for more flexible deficit spending in Germany. That could boost German and hence EU growth. It’s perhaps a long shot though to think that one person will have a lot of impact on such an important national issue.

In any case, he’ll still be on the Governing Council at their Dec. 16th meeting, when they decide on the next phase of asset purchases.

GBP was little moved by a modest miss in UK CPI (0.3% mom vs. 0.4% expected, 3.1% yoy vs. 3.2%). Despite the temporary reprieve on inflation, UK breakeven inflation rates continued to forecast higher inflation to come. The 10-year breakeven hit 4.06%, the highest since the heady days of mid-2008, before the collapse of Lehman Bros. triggered the Global Financial Crisis. (Note: the breakeven inflation rate is based on the Retail Price Index, not the Consumer Price Index that the markets focus on.)

The outlook for monetary policy is still dominating the pound as the rhetoric from some Bank of England officials, notably Gov. Bailey, has been quite hawkish recently. 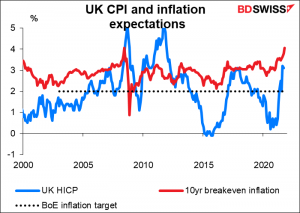 CAD underperformed the other commodity currencies despite higher-than-expected inflation – the yoy rate rose to 4.4% vs 4.3% expected (4.1% previously) and two of the three core inflation measures rose when they were expected to be unchanged. The currency generally tracked oil prices during the day (oil rose after the US Dept of Energy announced a 431k barrel decline in inventories rather than the 2mn barrel rise the market was expecting.) Has the market already discounted a further tightening in monetary policy at next week’s Bank of Canada meeting? It seems to be expected that the Bank will further taper down its weekly bond purchases, now standing at CAD 2bn a week (originally CAD 5bn). We may be already in the latter half of “buy the rumor, sell the fact” – selling the fact before it’s even a fact.

Or perhaps CAD is trading largely as a pure commodity currency with less attention to the impact of monetary policy. Notice how closely USD/CAD used to track the difference between US and Canadian 2-year bond yields up to 2018 vs the divergence after that. 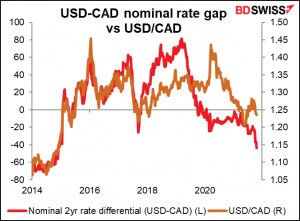 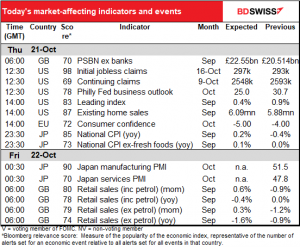 The day doesn’t really get started until the US opens for business, when we get the dreaded weekly US jobless claims.

Initial claims fell last week (-36k) and the week before (-35k) but some mean reversion is expected this week (+4k). Nevertheless it looks like claims have finally started to move lower again. 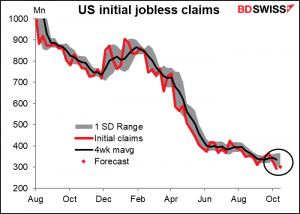 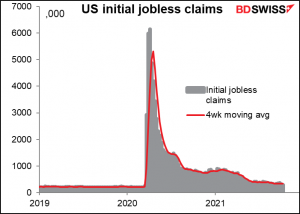 Continuing claims are expected to be -45k, the fifth week out of six to decline. They seem to be in a pretty good downtrend. 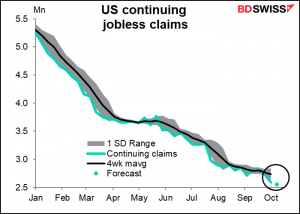 Continuing caims ranged from 1.66mn to 2.22mn before the pandemic and averaged 1.89mn (again, the 4-week moving average). Against that, today’s 2.63mn is again high, but not outrageously so. 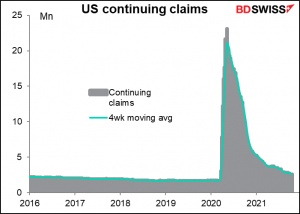 The Philadelphia Fed business outlook survey is expected to show a small decline to 25.0 from 30.70. Hah! So was last week’s Empire State survey. It was expected to fall to 25.0 too from 34.30. Instead it plunged to 19.80. Even so, it’s still showing an expansion, just not as much of an expansion as people had expected. 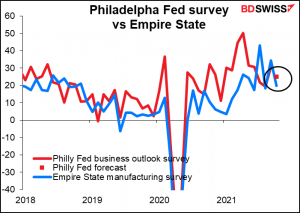 I don’t know why the US leading index gets as much attention as it does, since it’s calculated from other data that’s already been released. I’d have thought it would be reverse engineered by now and everyone would know it perfectly well before it came out. Apparently not as it has a fairly high Bloomberg significance number. A slowdown to +0.4% mom would show the same idea as the two surveys mentioned above: continued expansion but at a slower pace. 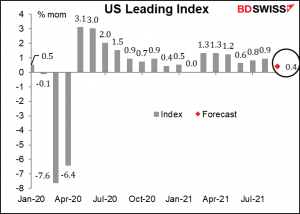 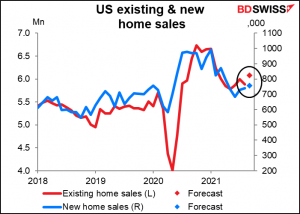 Overnight, Japan is expected to exit deflation (just barely). This would be no surprise as the Tokyo CPI rose from -0.4% yoy in August to +0.3% yoy in September, although “core-core” CPI – excluding fresh food and energy – was still down 0.1% yoy. (“Core” inflation in Japan only excludes fresh food, not energy as it does most everywhere else.) We can’t break out the champagne just yet though, as the BoJ is still touting its determination to get inflation back up to 2%. This figure therefore will make no difference at all. For more details on the outlook for Japan’s inflation, see my always informative Weekly Outlook. This week has a general Japan theme as I discuss the implications of Heian-era aesthetics for modern-day monetary policy. 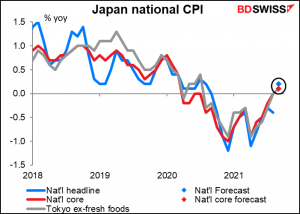 Then come the preliminary purchasing managers’ indices (PMIs) for the major industrial economies, starting with Japan. It’s odd that the Japanese PMIs do have a fairly high Bloomberg relevance score (80 for manufacturing, 70 for service-sector) but no one seems to forecast them.

As the day breaks in London, Britain announces its retail sales (actually, sunrise is 07:36 local time and this indicator comes out at 07:00, so a little before sunrise). The market is looking for a small rise in the headline figure, which includes petrol. This comes after four consecutive months of mom declines. Back-to-school and back-to-work – back-to-the-old-grind, in other words – should push sales up, especially sales of clothing as people realize that they can’t live in their pyjamas and sweat pants any more and their trousers no longer fit (see: food sales). The Bank of England would probably reason that a rise in retail sales is another sign that the economy can withstand some removal of accommodation and therefore it might be positive for the pound. 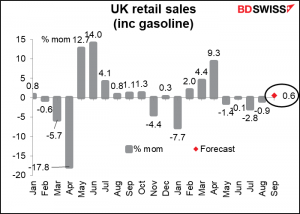 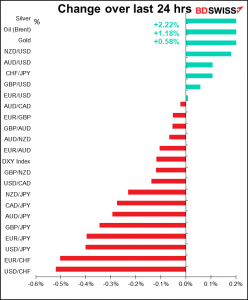